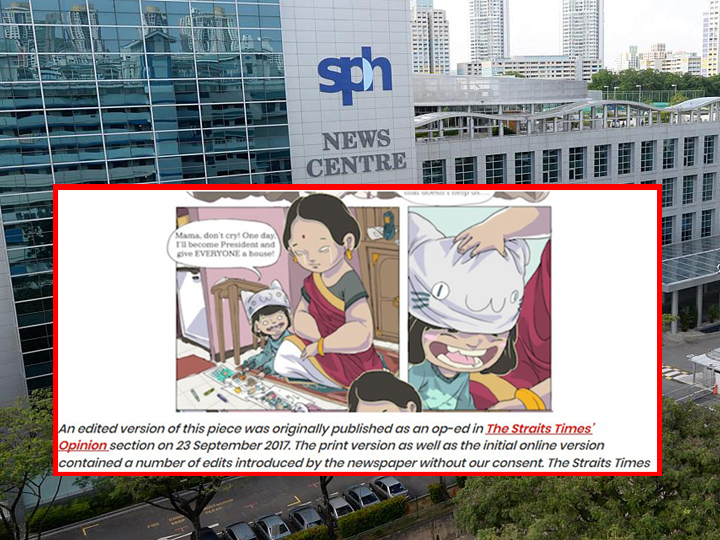 Don’t mess with AWARE (yeah the women’s welfare organisation of “sit down and shut up” fame).

The Straits Times got a harsh reminder of this when an editor of the paper saw it fit to twist the words of AWARE’s head of advocacy and research Jolene Tan.

Tan had written an article for The Straits Times, “Be child-centric all the way, including in housing”, which was first published on Saturday (23 Sept).

Some of her text was edited out (which is fairly common in news organisation because, you know, even we got to tidy up submissions ever so often).

But what shocked Tan more was the twisting of some of her words into “stigmatising language” when it came to describing divorced individuals, and adding words to her story which she had never intended for.

Tan was not informed of the edits.

The angry ma’am took to Facebook to expose the “fake news”:

“The Straits Times made the following changes to my text. I did not know of these changes before the op-ed went to print.

1. They added the following: “Most policies in Singapore are indeed child-friendly. In fact, we even have generous grants to encourage couples to have children.”

2. They removed the following: “In any case, fears about the possible costs of child-centred thinking may be unfounded. Japan has found that reducing legal discrimination against unmarried mothers did not increase their numbers.

But we need look no further than our own past to see another precedent: unmarried mothers could access subsidised HDB flats until the mid-1990s. In 1994, then-Prime Minister Goh Chok Tong announced an intention to revoke this access in order to signal moral disapproval. Yet in the same speech he also acknowledged that “few children [were] born out of wedlock” under the status quo then prevailing.”

Edited to add: I also DID NOT use the stigmatising language of “broken relationships” in describing divorced individuals. This is an insertion by the newspaper. I am really quite upset by this.”

The Straits Times has since apologised to Tan for any embarrassment caused.

Still, it has in puzzling fashion persisted in keeping a pro-government line in the article which Tan had requested be removed.

“The editor and I corresponded earlier today. She has apologised and worked to changed the text back to (mostly) reflect my intentions. The existence of previous errors has also been acknowledged on the Straits Times website. Unfortunately, one line which I don’t entirely agree with remains (the insertion described in point #1 below) (I frankly don’t know why, as I did seek its removal), but I do appreciate the apologies and the corrective action (on a Sunday, no less).”

You can read the original article written by Tan here, and the Straits Times version here.

This isn’t the first time the Straits Times has been called out for publishing “fake news”.

And it isn’t just the Straits Times that’s been found to have done so and got away with it.

Law and Home Affairs Minister K Shanmugam has announced that the government will enact new laws to outlaw fake news.

The laws are likely to come into effect next year, while consultation with stakeholders with start in the second half of this year.