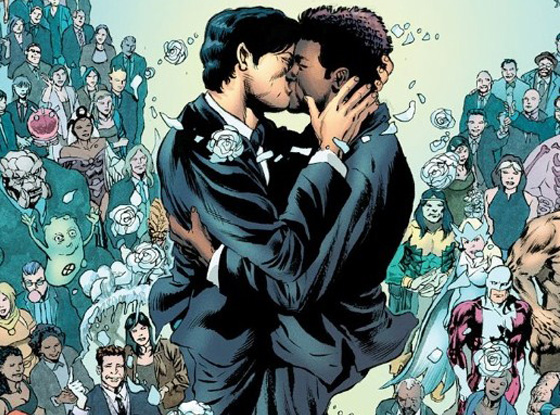 An Archie comic book which featured a gay marriage was removed from local bookstores but another comic, the Astonishing X-Men Issue 51, can still be found on the shelves. Both comics centre around gay marriages. So why the difference in treatment by the authorities?

In the X-Men comic, gay superhero character Northstar marries his partner Kyle Jinadu. The MDA says the X-Men comic offered a balanced treament of the issue. Referring to X-Men Issue 51, an MDA spokesman said: “The issue featured characters who objected to the wedding and this offered a balanced treatment on the issue of gay marriage.” The spokesman added that there was no breach of content guidelines, “which allow for the balanced depictions of same-sex relationships if they do not encourage or promote alternative lifestyles”.

The MDA said it has advised distributors to “shrink-wrap the comic and label it with the consumer advice “Unsuitable for the Young”.

The plotline for Archie: The Married Life Volume Three features the marriage of Kevin Keller, the popular series’ first openly gay character. The comic was pulled from bookstores in Singaporem but it’s still available in the National Library Board’s adults’ collection. The MDA had said earlier that the decision on the Archie comic book was made after consultation with its 28-member Publications Consultative Panel.

The panel advised that the theme of the comic was not in line with social norms and is in breach of existing content guidelines.