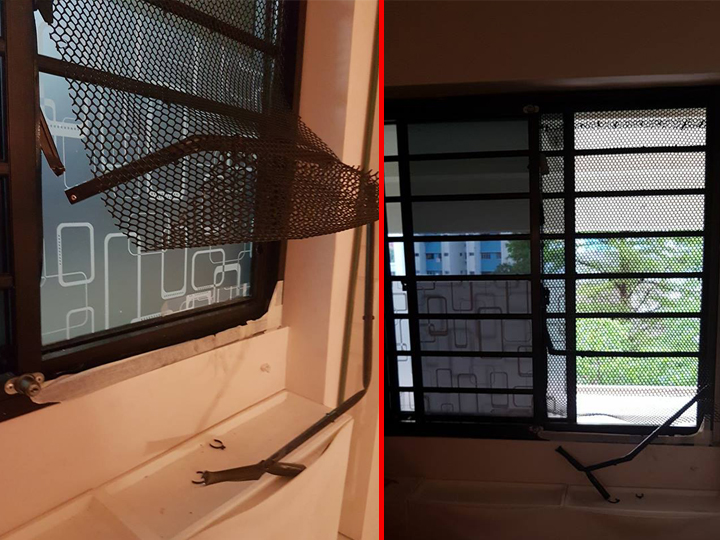 According to a resident there, Molly Molina, a crook tried 3 times to prise open the windows of her flat unit and enter the house.

But, despite being 3 tries, and time in between to leave, fetch better tools, and come back, he still couldn’t get the damn job done!

Then, when police officers tried to arrest him, he threatened suicide:

“The idiot got caught and even threatened to jump down.”

“So today a man tried to break into our house through the corridor window. It happened at around 5.20am. I was awoken to a loud bang and the sound of the window mesh grating against metal. Thinking that my cat had once again tried to squeeze herself out of the window, I went out of the room have a look. Instead I saw a figure fumbling at my window.

Somehow (keep in mind that I am shortsighted and just got woken up), I thought he was trying to help put my cat back into the house. So I actually said HI. YES, HI. Don’t ask why.

He got stunned and ran away to the staircase. I went closer to the window and realised that holy shit, a man just broke 2 bars of the window grilles! So I ran to wake my husband up and called the cops. Right after the call, we heard footsteps approaching our door. So I went to the peephole and saw the man (fair skinned, tall and wearing dark coloured long sleeves and pants) trying to push on the common room’s window this time. So my husband opened the main door. The man got shocked and ran away again. By this time, I have armed myself with a long kitchen knife, and my husband with a hammer.

And he actually CAME BACK for the 3rd TIME!!! This time he loitered outside our door and I quickly called the cops again to update them on the appearance of the man.

Within minutes, 2 officers came to our door and we whispered that he’s probably at the staircase landing. True enough, the idiot got caught and even threatened to jump down. We also noticed he broke a small shoe shelf we kept outside. Possibly from climbing on it to try to get through our window.

Half hour later, a female office came to our unit to check up on the damages and ask questions. An hour after that, an IO and a CSI came to take statements, photos and prints on our windows.

The whole ordeal lasted about 2.5 hours. It really shook me and I was still shaking (in fear and anger) hours after that. I couldn’t imagine what would have happened had he managed to get in. Luckily, my 2 year-old boy slept peacefully throughout.

What have I found out about the culprit? He’s a 29 year-old local Chinese, lives around blk 700+ in yishun, tall and a little on the big size, and has past criminal records. Oh and he was pissed drunk and fell asleep in the void deck halfway through the interrogation.

I’m not sure if he’ll return. But we’re more prepared this time. I now have homemade pepper spray, and solid / sturdy household items placed around the house to cave his skull in (metal bars etc) should he come back. Don’t try us, @ssh0le.

P.S. Our cats were fine. Poor Bobbin was hiding in fear under the couch. Brucey was just sleeping on the couch, unimpressed by everything. We might just need a guard dog.”